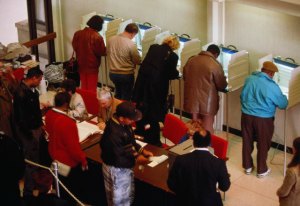 Who wins the White House doesn’t matter – the system is broken, according to Dixie Swanson, former Beltway insider and author of The Accidental President Trilogy.

In fact, a recent Gallup poll shows 81 percent of Americans are dissatisfied with the governing of the country, a historic number. “Whether we elect Mitt or Barack, we are going to be facing the same gridlock that’s jamming and corrupting the process today,” she says.

Swanson suggests a number of fundamental amendments that have been outlined in previous blog posts. The remaining suggestions are described in this entry.

• Constitutionally Mandated Campaign Reform: The big money of PACS and Super PACS is corrupting. Let’s return power to the voter. Only voters can donate, and then only to one candidate in each race for whom they can vote: his or her choice for representative, senator and one presidential ticket. Congress may set a limit on donation amounts. No entity of any kind may give money to the candidate or give it to an individual to donate. Any violations are a federal crime punishable by five years in prison with no parole. Just as your ballot is secret, your donations will not be published on the Internet (with your address) as they are now, but will be reported daily to the Federal Election Commission by the campaign treasurer. All donations are to be made by check, credit/debit card or electronic funds transfer. No cash donations are acceptable and there are no in-kind donations. Lobbyists can still exist and do advocacy, they just can’t bring money, or anything of value, to the conversation. During an election, any advertising is to be paid for by the candidate and by no one else.

• The Line-Item Veto: Congressional attempts to give the president line-item veto power have been shot down by the courts as unconstitutional, so the onl way to provide this is by amending the Constitution. As is stands now, the courts can throw out a part of a law, but the president cannot. That is inequitable.

Dixie Swanson (www.dixieswanson.com) was a pediatrician for 10 years and the Family Health Reporter for NBC’s Houston affiliate. She also spent time working for a Washington lobbyist with access to the White House.  Author’s note:  This series is not to be construed as a political ad or endorsement of any sort. Rather, it is designed to offer insights into resolving the partisanship gridlock that has been hurting America, regardless of whether Democrats or Republicans have been in the majority.